Home › Experiences › Our Stories › What Chakra are You Living In? 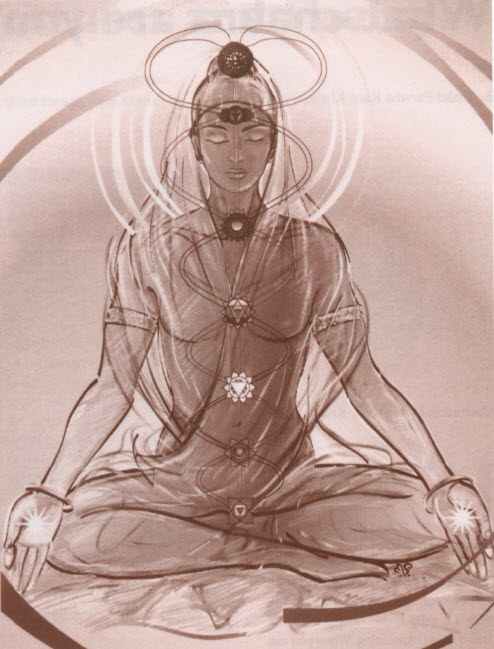 This article appeared in the 2004-Summer Aquarian Times Magazine and was written by Shakti Parwha Kaur:

In her strappy red high heels, itsy bitsy mini skirt, with her pierced navel (ouch!) showing, jumping up and down screaming her lungs out at a rock concert, would you think for even a moment she was coming from her higher chakras?  Hardly. Well, our behavior, our appearance, our atti­tudes all reflect the qualities of the chakra we’re expressing. When you ask someone, “Where are you coming from?” you don’t mean, “Did you just get off the plane from Detroit ?”  We instinctively understand that the way people speak and act depends upon where they are “at.”  Basically it depends upon in which chakra, or energy distri­bution center, the majority of kundalini energy is focused. And this location fluctuates.

Very few, if any of us, consistently live in our higher chakras. Assuming we’re all yogis, i.e. trying to live in “higher consciousness,” we spend time every day meditating . Sure, in yoga class, we sit calmly in Lotus, eyes focused at the Ajna Chakra.  Meditating on the inflow and outflow of the prana, inhale Sat; exhale Nam . Ah, what bliss! Aspiration, tranquility, and peace-that’s devo­tion. Then we walk outside, discover a dent in the fender of our brand new Jaguar, or driving home someone cuts us off in traffic.  Those expletives we utter are not coming from the heart chakra!

All chakras are “good”- let’s not throw any of them away!  We need them all.

The trick is to know how to make posi­tive use of the valuable energy in each.

Which chakra do you want to use as your “home base?” What’s the vantage point from which you see and hear the world around you so you can respond appropriately, wisely, in any given situation?

To hear your own inner voice, the voice of intuition that gives you the best advice and guidance, requires that you become very well acquainted with your sixth chakra, your Agia, or Ajna Chakra, sometimes known as the Third Eye.

I read a book by T. Lobsang Rampa back in the sixties about someone so eager to activate his third eye that he drilled a hole in his forehead.  Not recommended! Fortunately, the prac­tice of Kundalini Yoga stimulates and activates the secretion of the pituitary gland, which increases intuitive aware­ness (without surgery).

If you’re living most of the time subject to the negative aspects of your lower three chakras, then you’ve probably got a lot of commotion in your life. You may be on an emotional roller coaster, compulsive, reactive, suffering from anxiety and depression, or  overly elat­ed and giddy with excitement. Do you “fly off the handle?” Lose your  temper at the slightest thing? Anger can turn to rage.  Not a happy way to live.  On the other hand, if you are  using the energy of the lower chakras from a stable van­tage point in your higher chakras, then you take reasonable care to provide for your physical and material needs, you experience human emotions, but you’re not drowned in them, and you have courage and determination. 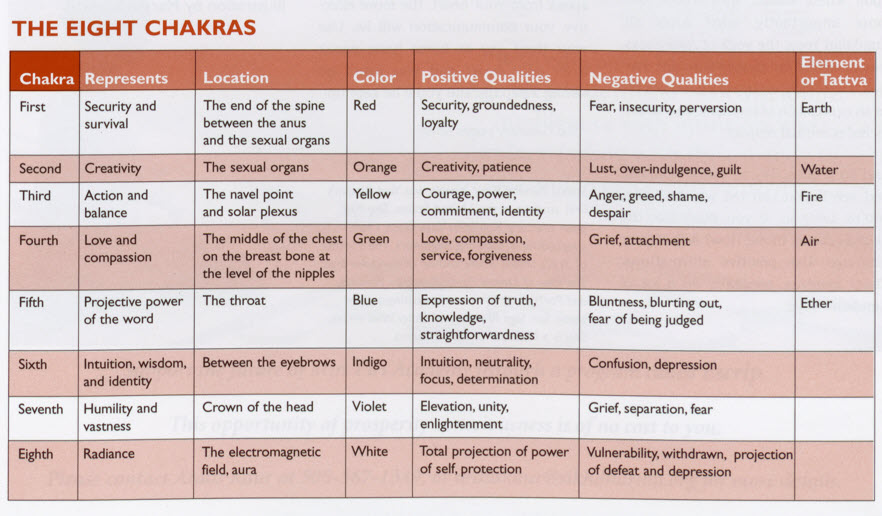 Do you love, or do you lust?  Fourth chakra or second chakra? True love comes from the heart; it’s a total outpouring, giving, asking nothing in return. Second chakra is powerful; the inspiration to create begins here. But unless you control it, it controls you, and you spend most of your time in emotional quicksand. Many people overeat to satisfy emotional needs. We all need to eat; it’s a necessity, hopeful­ly it’s a pleasure, but compulsive eat­ing? Second chakra, not at its best.

Too much focus on the second chakra can stimulate obsession with sex. Not that sex is a bad thing; it all depends upon when, where, with whom, and more importantly, why!  After all, Kundalini Yoga, the yoga of Awareness, was designed for people who are mar­ried, and ideally enjoying a great sex life as an expression of mutual love, which includes mutual respect.

And so it goes. Try to watch yourself, and see if you can tell which chakra you’re living in. If you don’t like the neighborhood, move! How? Adjust your language. Use positive affirmations. Chant mantras, meditate, do a lot of Kundalini Yoga. 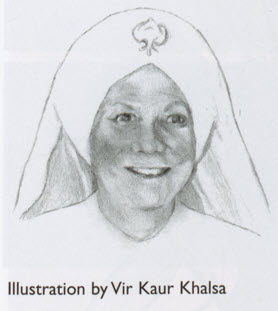 Shakti Parwha Kaur Khalsa was Yogi Bhajan’s first  student in the United States. She started teaching Kundalini Yoga in 1969, specializing  in  teaching  beginners. The Mother of 3HO, Shakti is the author of Kundalini Yoga: The Flow of Eternal Power and Kundalini Postures and Poetry.  She is a Minister of Sikh Dharma.

Home › Experiences › Our Stories › What Chakra are You Living In?