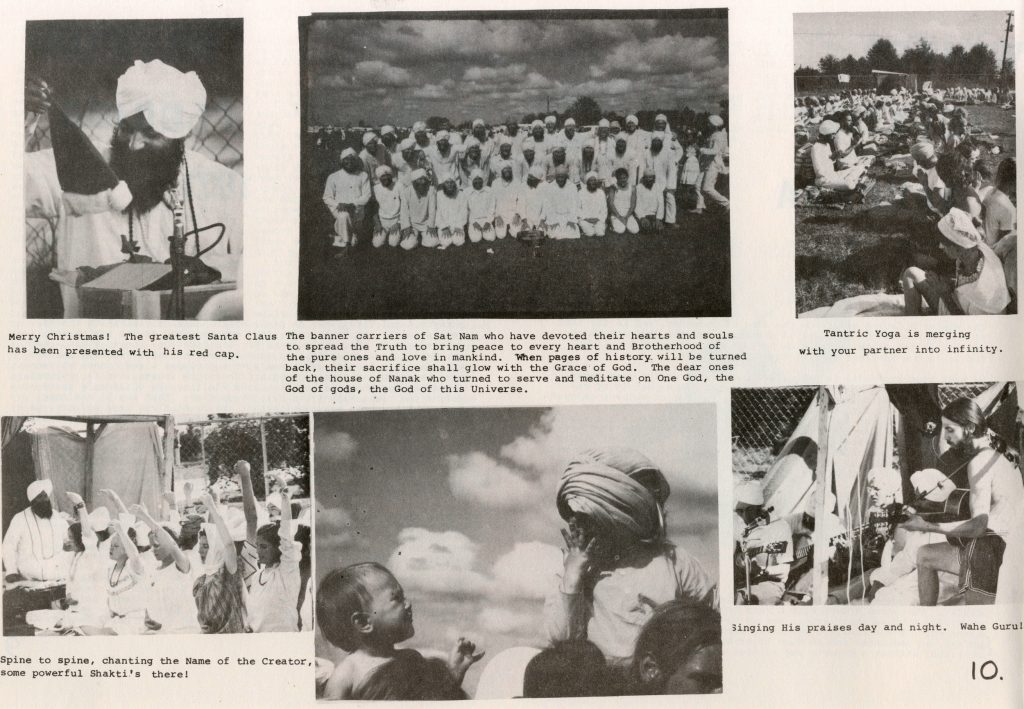 This poem was written by Gurutej Singh Khalsa

Winter Solstice Sadhana, Nineteen Seventy-One,
We went to Florida to enjoy the sun
At the ashram of Baba Siri Chand,
Under the green trees, beside the pond.
We set the camp and pitched our tents
To enjoy, together, that great event.

It was a beautiful day in the Sunshine State
To construct the camp and meditate,
Yogiji spoke to us that first morning,
“Be careful what you eat,” was his warning.
So we went to the beach, we enjoyed the day,
Then the Sheriff told us that we couldn’t stay.

So after dinner we struck the camp,
The evening air was chilly and damp,
We packed the tents as the light grew dark
And prepared to move to a trailer park.
All cars were packed and ready to go
Then one by one, we moved out, slow.

Each car was packed with its full load,
As we moved the convoy onto the road,
One hundred vehicles moved in the night
Past Yogiji, directing with his flashlight,
Standing at the entrance to the Ashram’s drive,
He directed the traffic to keep us alive.

We moved across town past the county line,
A long string of cars moving serpentine
Through the streets of the city, our headlights carved their arc,
Then we stopped at that funky old trailer park.
And the first thing that he told us, before the tents went up,
“Enjoy the Winter Solstice Sadhana, but avoid that grocery shop!”

The winter night was lovely as we pitched the tents,
Yet many of us were struggling with his last comments,
For the grocery store was open late into the night,
And that temptation was more than most of us could fight,
Plus, chocolate keeps you warm when it’s dark and cold,
So, from that little store, every Hershey bar was sold.

That first Winter Solstice Sadhana was a turning point for me,
So with new inspiration I returned to Tennessee,
For at that funky place in a tent that leaked the rain,
A little spark of Self began to glow inside my brain
And many long years later I can joyfully exclaim,
That little spark inside me has fanned into a Flame!