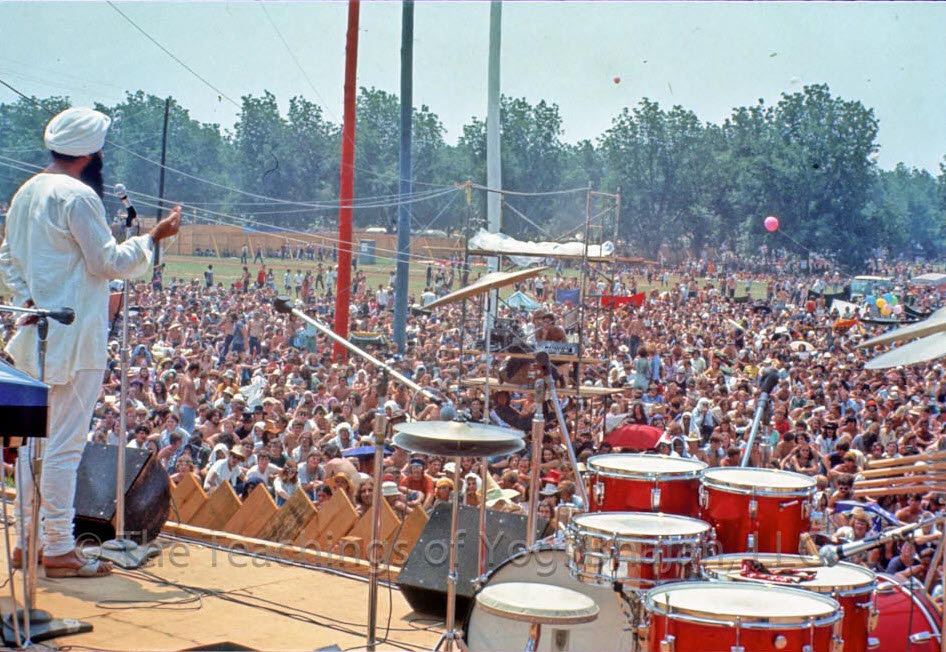 Yogi Bhajan on stage at the Atlanta Pop Festival in 1970

This article appeared in the 2009, November/December issue of Aquarian Times.

Woodstock was one event; one concert. It was also an experience that captured the prayers and outrage of a generation. It was a seed—finite, compressed, full of potential, and ready to grow—a prayer for something different. Millions of people wanted something other than lies, war, mistrust, and prejudice. We had just been through several assassinations. We were hurting from the war. Large corporate interests seemed to negate what was most alive, subtle, and essential to being a human being vested with creativity and freedom.

Woodstock was a common voice for freedom, socially and spiritually. If you look at Woodstock as a concert only, you could miss its significance. What happened then, in the years surrounding Woodstock, is best seen with the heart. Richie Havens’ voice rang out with the opening number at Woodstock and spontaneously pulled at our hearts with his song, Freedom. That seed, once planted, continues on. That he opened the concert, that the topic was freedom, that the energy was courage, that the tone was kindness, that the commitment was to choose a new way forward, was perfect. The timing, cosmically directed or otherwise, brought all the energies together to signify for us the possibility of a deep change. That possibility was so tangible and real that it scared the mainstream interests—military, corporate, and social—and still does even today. The years following Woodstock saw a lot of persecution and the dream was deferred for another generation to pick up and follow, or not.

The Woodstock generation wanted to bring about new experiences and radical social change. And like the aftershocks of a great earthquake, it continues to shake (and shape) the way we think, connect, express our spirituality, and be human together. In 2009, the 40th anniversary of Woodstock, a celebration was planned but failed to take place. Woodstock, and the awakening human spirit, no longer needs those fields. The desire to connect and elevate is present everywhere, living in our own sadhana (daily spiritual practice) and in our own consciousness. It’s now in the hands of each person to connect, to act, and to support organizations that express consciousness. 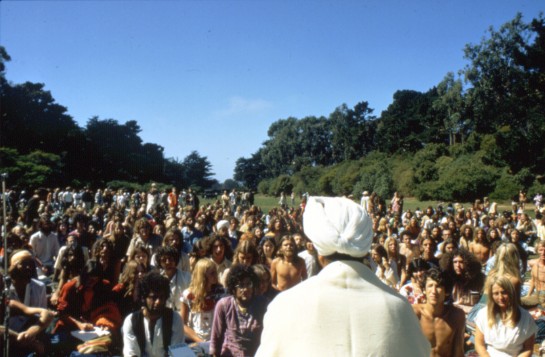 Woodstock, through the eyes and words of Yogi Bhajan, gives us a unique view of what was important and a clear vision of the Woodstock nation and what it could mean. In 1972, as we built the Solstice encampment at Mendocino, California, he announced that he had come as the “father of the Woodstock Nation” to transform us into the “Steelstock Nation.” To him, Woodstock was a call for human dignity, independence, understanding, courage, and peace. The urge was there. The prayer was there. The capacity to sacrifice, in the face of great opposition and against the inertia of ignorance and vested interests, was there. All that was missing were the teachings, and he delivered those teachings to us, saying he didn’t want students. Instead, he wanted teachers. He wanted each person to love her Self, stand for his consciousness, and learn how to commit and sacrifice. In that year following Woodstock, he announced that he would be sending teachers all over the world, calling them the beads, or pearls, of an Aquarian mala that would uplift and serve this new consciousness.
Reflecting on the impact and meaning of “Woodstock Nation,” Yogi Bhajan commented:

“Twenty million youth in America revolted. Nineteen million overdosed, got depressed, were politically crushed, or were rejected. One million survived and changed the consciousness of America. Today you go anywhere, ‘Oh, Yogi Bhajan. I met you in 1971. I met you in 1977. You were with us.’ Now they all have good jobs. They run the United States. This evolution, or revolution, which came to this country, was not cheap. Nineteen million people giving their lives to bring consciousness is not a small issue. This Woodstock Nation woke up, brought itself to recognize the Self and not react to the societal trend and lack of consciousness. That awakening and sacrifice in the face of opposition created a balance. And without personal sacrifice, no balance can be created.” ~Yogi Bhajan, 1991

He saw the need for and emergence of group consciousness: to ensure the consciousness of the individual and to serve the heart, allowing each person to experience the fulfillment of universal consciousness. He admonished us not to repeat the errors of power, politics, and religion that gave birth to the Woodstock Nation. We needed a new openness and integrity in order to succeed and excel in the global Aquarian world. Somehow, in the seed called Woodstock, was the potential of a new consciousness, a social transformation and globalization of our planet and an awakening of individual dignity.

“We have created a unified, collective identity. This is unusual—a small miracle. Guru Gobind Singh, the 10th Sikh Guru and a Master Yogi in the late 1600s, was asked, ‘What is the greatest miracle on the Earth?’ He said, ‘Jamat kaaraamaat’—‘Collective strength is the biggest miracle.’ Some people are very shy. They don’t want to talk to anybody. They want to bring their own life together only in the way they imagine and want. Ultimately they will get burned out. There is one term, sangat, and saadh sangat. The exact or literal translation is ‘A group or collective identity of the disciplined ones.’

When we came together we decided we would guide our way on. My way and your way we already know, so we do not need to learn that. Each one of you knows ‘my’ way and ‘your’ way. All we have to learn is ‘our’ way.” ~Yogi Bhajan, 1984

This was his vision, which he shared with the Woodstock Nation, that they might realize their own strength. We, the inheritors of the Woodstock Nation, are people of dignity, who act with kindness, love challenge, revel in spirit, and take as a primary value the ability to see the reality of God in every person. Be together. Trust first. Commit first. Hate none. Practice loving yourself so that you may know how to live with self-respect. No philosophy or religion or belief is required. Live practically, live in the truth that comes with every breath.

~ written by Gurucharan Singh Khalsa, Ph.D. and published in the 2009 Nov/Dec Aquarian Times

Everything that is in creation has its own essence and sound, its mantra. The mantra for Woodstock was, Ang Sang Wahe Guru. Ang is a part or elementary part. Sang is every, or all. Ang Sang is when the polarity of Ang/masculine and Sang/feminine combine so every part is connected seamlessly with all other parts. That intuitive, communicative, and sentient combination of sound and projection is the open invitation to experience Wahe Guru—the infinite wisdom and presence of reality. Ang Sang Wahe Guru is to experience the ecstasy of all parts, finite and infinite together, in effective creativity and understanding.

Shortly after Woodstock, Yogi Bhajan taught us to chant this mantra consciously. Look at the tip of the nose. First notice the tongue, mouth, and reflexes that accompany conscious chanting. Then connect the sounds spoken at the Navel Point. Speak each sound with the navel energy activated. Then as the energy builds and the central channel of the spine opens, vibrate all time and space from that central channel. Merge into that infinite pulse and let the innate structure of the sound, the naad, raise your Kundalini, dissolve your ego and your fears, and immerse you in the clarity and ecstasy of the Oneness of All.