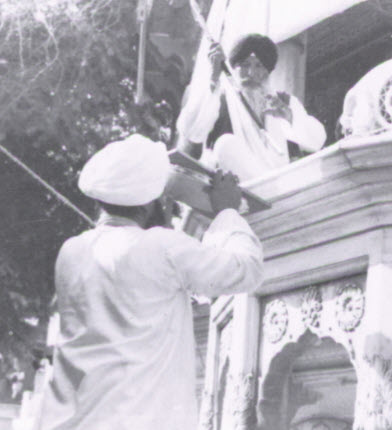 This was published on page 125-127 of the book, “The Man Called the Siri Singh Sahib” and was written by M.S.S. Sardarni Premka Kaur Khalsa (aka Pamela Dyson)

The title of Bhai Sahib is recognized by Sikh communities everywhere as a title of Great honor and respect, to be bestowed in the event of outstanding spiritual qualities and/or great achievement in serving the Guru’s mission.  It is also a title which is hereditary, as it is passed on for the male heirs of the families in which it has been bestowed.

In the case of the Siri Singh sahib, the title of Bhai Sahib has come to him by three different avenues.  First, in his own family line, his father’s maternal uncle was Bhai Ran Singh who passed on his estate and accompanying titles to his sister.  His sister was the wife of S. Fateh Singh, who thus became Bhai Fateh Singh and who was the Siri Singh Sahib’s own saintly grandfather.

According to their family tradition, when Maharaja Ranjit Singh was suffering with small pox, the doctors could not help him, he went to see Sant Abinasha Singh to receive his blessings, but the Maharaja had come to this saint with the ego of a king.  Santji did bless him saying that since he had come to see a man of God, he would be blessed with perfect health.  But because he came with his ego, he would lose one eye in order that he might learn to see the world without duality.

Thus, it was Maharaja Ranjit Singh, the renowned one-eyed king of the Punjab who built the empire of the Sikhs during the 1800’s, who bestowed upon Sant Abinasha Singh Ji the title of Bhai Sahib and from that time onward, Bibiji’s family was known as the “family of Bhai Sahibs”, (Khaandaanee Bhaaeeaan).  And again, the title of Bhai Sahib became the privilege of all male members of the family.

In 1974, Siri Singh Sahib Harbhajan Singh Khalsa Yogiji made a second visit to India, since beginning his mission to the West.  By then, he had already established the Sikh Dharma in the United States of America as a federally recognized religion with tax exempt status; he had promulgated the Principles of the Dharma and the Model of Standard behavior for Sikh Ministers; he had ordained ministers; and he had established the Khalsa Council as the chief administrative body of the Sikh Dharma of the Western Hemisphere.

On November 13, 1974, in recognition and appreciation of his selfless service and his significant accomplishments in spreading the Sikh Dharma, and establishing the order of the Khalsa in the West, he was honored at the Akal Takhat in Amritsar.  And so, for the third time, he became Bhai Sahib when on the recommendation of the S.G.P.C. the employed Jathedar of the S.G.P.C. for the Akal Takhat, conferred upon the Siri Singh Sahib the most revered title of Bhai Sahib, which means, respected brother of the Khalsa.

To mark the occasion, the Siri Singh Sahib was presented with a beautifully engraved silver plate, which today holds a place of honor among the archives of the Sikh Dharma of the West and sits before the Siri Guru Granth Sahib at Guru Ram Das Estate in Los Angeles.

A Hukam Naama, i.e. a decree, was also issued by the Akal Takhat on this occasion.  It’s text is translated as follows:  “The Khalsa Panth hereby recognizes the valuable services rendered by Bhai Sahib Sardar Harbhajan Singh in the cause of spreading Sikhism in the foreign countries.  May Akaal Purakh Wahe Guru bless him with still greater zeal and faith to live up to the lofty principles of Sikhism.”

The Siri Singh Sahib had surpassed his given destiny by earning the love and respect of the entire Sikh sangat through his selfless and tireless missionary efforts as he received the title of Bhai Sahib from the highest throne of religious authority in the Sikh realm.