Born Zero. Died at One 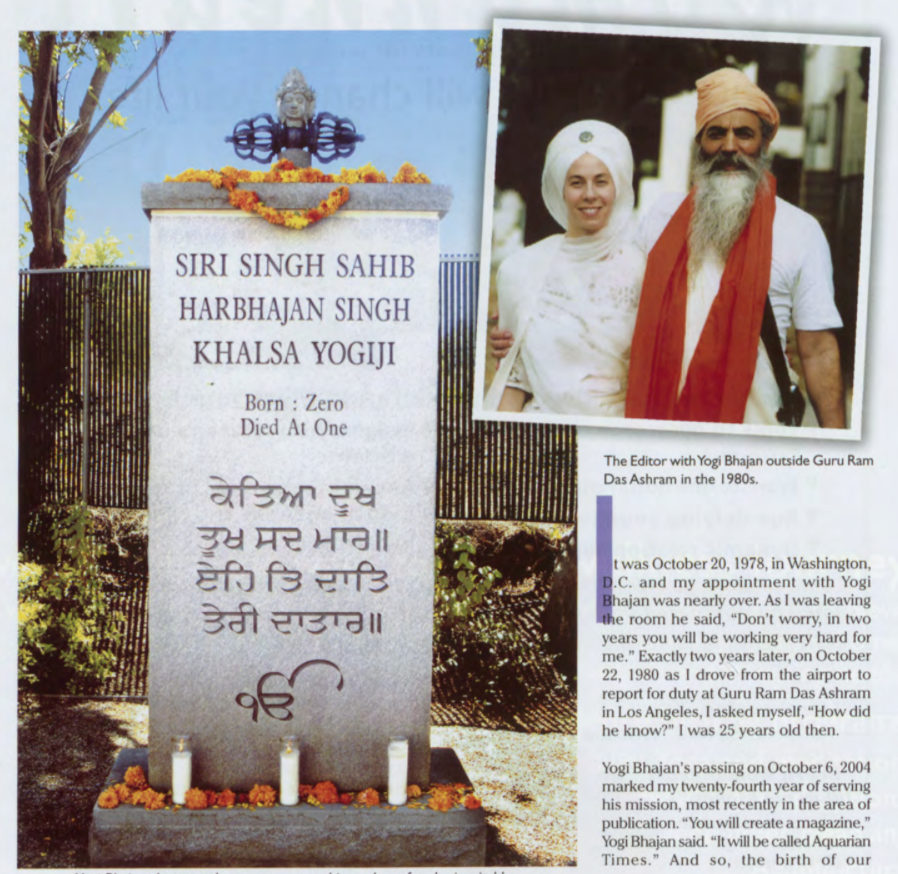 Photo on the right:  Aquarian Times Editor, Siri Ram Kaur, with Yogi Bhajan outside of Guru Ram Das Ashram in New Mexico in the 1980s. Photo on the left:  Yogi Bhajan always took care to prepare his students for the inevitable. “Love the teachings, not the teacher,” he said. Years before his death, he commissioned this monument. which remains in full view on his ranch. (Photo by Gurudarshan Kaur Khalsa)

The following is a note from the Editor, Siri Ram Kaur, as it appeared in the 2005, Winter Aquarian Times issue.  (This was the first Aquarian Times Magazine published after the death of Siri Singh Sahib Ji.)

It was October 20, 1978, in Washington, D.C. and my appointment with Yogi Bhajan was nearly over. As I was leaving the room he said, “Don’t worry, in two years you will be working very hard for me.” Exactly two years later,  on October 22, 1980 as 1 drove from the airport to report for duty at Guru Ram Das Ashram in Los Angeles, I asked myself, “How did he know?” I was 25 years old then.

Yogi Bhajan’s passing on October 6,2004 marked my twenty-fourth year of serving his mission, most recently in the area of publication. “You will create a magazine,” Yogi Bhajan said. “It will be called Aquarian Times.” And so, the birth of our publication in 200I-much like the birth of countless other ventures and adventures over the past three decades-begins with a story about Yogi Bhajan, the man who has been our teacher since his arrival in America in 1968.

In honor of his passing in his 75th year, we thought it time to tell the stories that are part of his legacy.

Some of those stories describe moments that have affected us all­-like Shakti Parwha Kaur’s tale of Yogi Bhajan’s first days in Los Angeles; or Guru Slngh’s decision to wear his first turban.

Some of those stories describe incredible successes–such as Sada Sat Singh founding the Yogi Tea Company with his partners over  lunch in a Coco’s Restaurant;  or Gurutej Slngh’s rejection from the police force that led to the founding of the now multi-million dollar company, Akal Security.

Others are tender and poignant–like Ek Ong Kaar Kaur’s final, etheric farewell to the Master.

These personal stories, all of them together, create a history. In assembling this issue, we’ve drawn great inspiration from The Man Called Siri Singh Sahib, the handsome white leather-bound volume that was the first comprehensive chronicle of our community.

And lo our readers, you are a part of that community. Even if you’ve never met Yogi Bhajan, chances are you’ve been touched by him.

A sage, a lion, a king—his great man can never be replaced. But he can be honored over and over again by our effort to continually share his teachings for living a healthy, happy, and holy life. Yogi Bhajan said, “Love the teachings, not  the teacher.” And as we’ve grown, Aquarian Times has tried to follow that advice, to put the teachings first.

But it is simply impossible not to love this man called Yogi Bhajan. And it’s that love that we share with you now.

We say goodbye to the Master of Kundalini Yoga in the physical sense, but he remains alive in our hearts, and in our daily practice.

May we continue his work as we approach the Aquarian Times.

In the spirit of Universal acceptance,