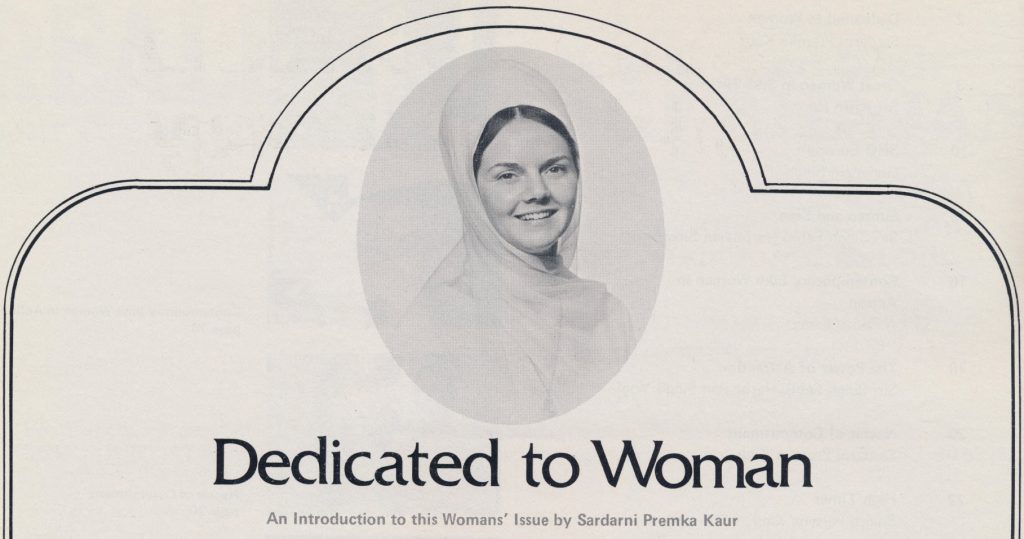 “This issue of Beads of Truth has been dedicated to Woman and it is meant to serve as a reminder of the highest nature of woman, of her beauty, her grace, her power and her capacity to shape and transform humanity.

It is an expression of the need for human liberation, a liberation of consciousness which will liberate every hu­man being to be as he was created, without fear, without misunderstanding, without resentment and anger.

Nearly six years ago, Yogi Bhajan began working with the young people of this country, to give them an alternative to drugs, to give them a means of keeping their bodies healthy, to give them values of life and to rebuild the structure of family life.  He struck at the root of the problems facing the entire western societies today:  the lack of respect and reverence for woman, the devaluation of the function of raising children, the breakdown of the family structure and the pollution of the basic vibration – the WORD.

He began to draw upon the knowledge accumulated in his own personal life experience, as well as the knowledge of the saints and sages who lived during the past 10,000 years, to present some simple and practical techniques for living healthy, happy and holy. These have included pure, natural foods, vegetarian diet, exercise, breath control, meditation, and use of the sound current through chanting and singing. It has included guidance in interpersonal relationships, guidelines for marriage and child-raising, hygienic hints for men and women, ap­plication of group-conscious living, advice in work and economic development, and techniques for the channeling of emotion and negativity.

It has also included, and very prominently so, the teaching of reverence and respect for women. The role of child­ raising has been elevated into its rightful position as the most significant and major task to be accomplished for the advancement of the human race. Woman has been appreciated in her nature as a creative, intelligent, inspiring and attractive being, who must now look deep within herself to regain her self-image and her grace, so that her greatness might give strength to the projection of the qualities of life for which a woman must take responsibility.

Woman is the keeper of the qualities of patience, tolerance, compassion and forgiveness. If womankind forsakes these qualities in a struggle for competition with man, the world will become a cruel and vicious place.  Woman is and has always been the power behind the throne, who shapes the image of her man and gives him the strength and inspiration to deal in a struggling society. She is the keeper of the home, the pivot of the social structure, and when she allows herself to be degraded as a sex symbol, she gives man the license to destroy all which she is responsible to create. She thus allows man to devalue her as a human being.  She thus allows man to break apart the family structure, and to hurt her children and to mar their growth as fulfilled human beings.

It is not to say that man is vicious or cruel, but woman is there to balance a man’s nature, just as a man is there to balance a woman’s nature. Woman has been copping out on her responsibility and so today the entire picture is distorted, and it will take the reinstatement of the grace and majesty of the female to put the picture back into focus.

Women do require liberation.  But from what? To what? Woman must be liberated to be a total woman. She must be liberated from limiting herself to the concepts which have been placed upon her by a sick society. She must be liberated from the fear of being what she was born to be- a WOMAN!  As Yogi Bhajan has told us many times: ‘A woman is never equal, she is more than equal’. She carries a great weight of responsibility for shaping society and nations. She has been given the biggest job, and she has been well equipped for the task, she need only be reminded of who she is.” 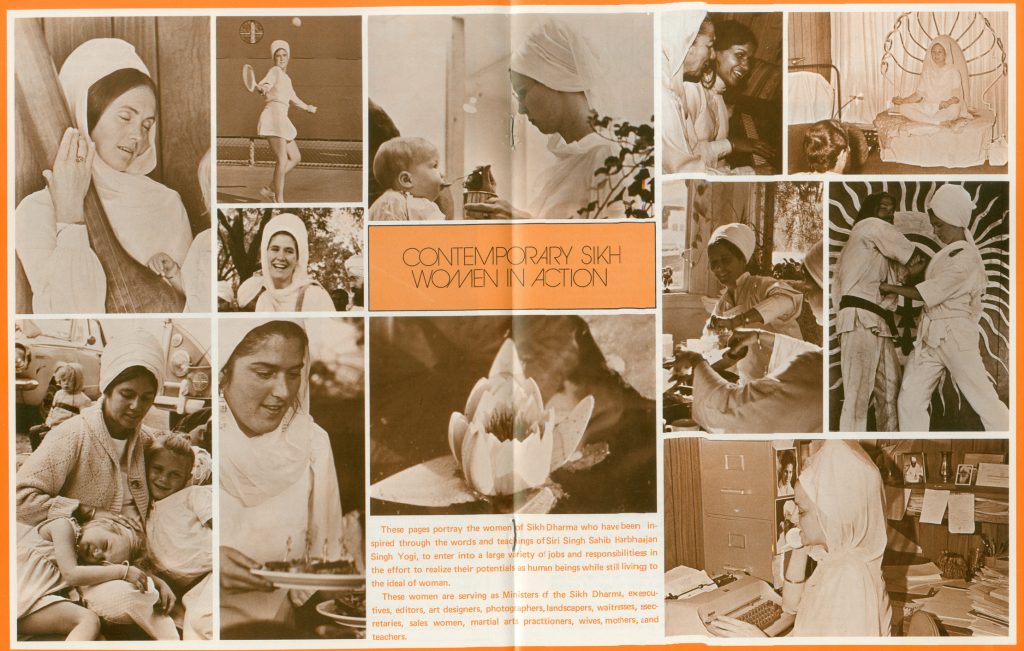 The words printed on the above image which was published in the Summer 1975 Beads of Truth, edited by Sardarni Premka Kaur (Pamela Dyson):

“These pages portray the women of Sikh Dharma who have been inspired through the words and teachings of Siri Singh Sahib Harbhajan Singh Yogi, to entre into a large variety of jobs and responsibilities in the effort to realize their potentials as human beings while still living to the ideal of woman.