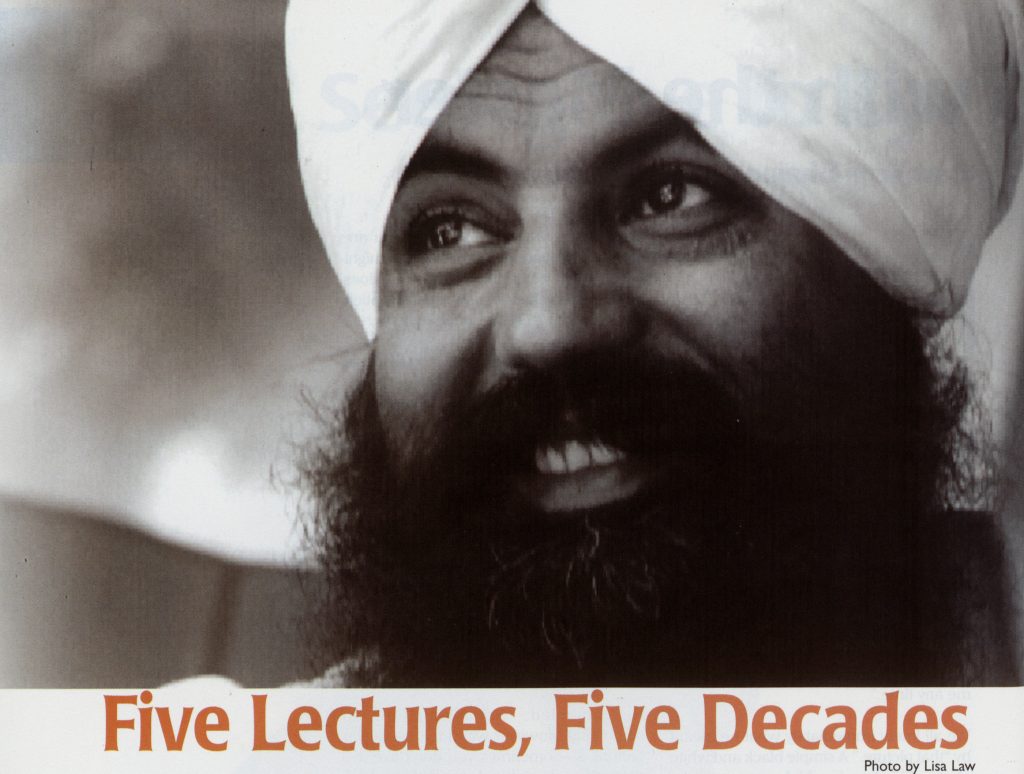 This article from the Winter 2005 Aquarian Times Magazine shares 5 lectures from the Siri Singh Sahib, Yogi Bhajan – one from each decade.  Here is the introduction of this article by MSS Shakti Parwha Kaur, his first student:

“It’s not the life that matters, it’s the courage that you bring to it.”

When Yogi Bhajan first started teaching in the United States in 1969, he emphasized certain principles from which he never wavered. “I’ve not come to get students, but to train teachers.”

With an endless flow of inspiration, his words always carry right to the heart of each listener. The same themes appear over and over throughout the years, yet always freshly presented and always expanding greater self-awareness for the student.

“Don’t love me, love my teachings.”

He created the 3H0 Foundation to fulfill his vision of a Healthy, Happy, Holy Organization – a “family” of people who live consciously and successfully, not just with each other, but for each other.

“Any country in which woman is not respected is doomed to failure.”

He emphasized the need for recognition of the power and potential of women as the “Grace of God.” He began a training camp especially for women.

His lectures and classes always include encouragement to do a regular, consistent, daily sadhana, pointing out that the first step toward happiness is commitment.

He defined “holiness” as practicing the Golden Rule while receiving each breath gratefully, recognizing that it is a gift from the Giver of all life. He quoted from Guru Nanak who taught that there is One God who breathes in all of us.

He explained that how you choose to worship that One God is your religion, whereas Kundalini Yoga is a science, a method by which anyone can experience that God within.

“Value your breath; it is the direct link with your Creator.”

He trained teachers – providing an alternative lifestyle to the Seventies’ prevalent drug culture, uniting spiritual teachers, promoting world peace, honoring woman as the mother of all mankind – these were his main points, as he traveled the world setting an example of selfless service and personal sacrifice.

There is no way to fully encompass the vast library of Yogi Bhajan’s teachings. In each era, he gave us something unique. In that spirit, we offer five slices of his wisdom, one from each decade in which he taught, preparing us to consciously enter the Age of Aquarius.