Home › Experiences › Our Stories › His Holiness: A Personal Memoir

When I was a young man, I went to a World’s Fair in Montreal, Canada. The fair seemed to be a representation of everything that was best in the world. It was beautiful. From the exposition, I took away some wonderful impressions, including the motto of the fair, by a French writer: “To be a man, is to feel that through one’s life one has made a contribution to the world.”

While I continued with my regular schooling, I devoted a good deal of my time to researching the subject of making a contribution to the world. How does one do it? I read the words of great minds, the classics of Plato and Plotinus, Freud and Jung, Russell and Orwell, Nietzsche and Schopenhauer, Marx and Engels, Kafka and Camus. I even found a couple of books on Tibetan Buddhism which influenced me deeply.

At sixteen, confirmed in my rebellious ways, vegetarian for a couple of years now and without a haircut for a whole year, I left home to join “the Movement”. Perhaps I was influenced by the fact that a great yogi had lived not so far away in Toronto and must have passed by the highway near my town on his way to the capital and back. Perhaps his expansive magnetic field had touched my own. All I can say is that I was very restless in those days and very hopeful that I might indeed make some sort of contribution. But how?

A couple of years later, having hitch-hiked to the West Coast and discovered hatha yoga and meditation and a good deal else, I sat alone, dismayed thinking of the war and suffering in the world and what it would take to improve the situation. I thought we as a humanity could benefit from a whole new culture, one that was vegetarian, that took its inspiration from poetry and music rather than psychotropic substances, a culture that respected women as much as men, a culture that treated meditation and yoga as essential keys to wellbeing, a longhaired culture that honored the human form in its natural state. I knew I was not a prophet, just a young man wise for his age. But what could I do?

When, a few months later, I found the 3HO center in Toronto, I could not help but marvel at the congruence between all the community practiced and all I believed. It was such a natural fit; even if it did mean rising extra early; it made sense!

I took a bit of time warming to the figure of the great yogi who inspired all the little yogis in my community – though I was the littlest of them all. The tratakam meditation picture of Yogi Bhajan was used for posters and widely displayed. In the first year, that photo scowled at me 90% of the time. Besides, with my parents being immigrants from Germany after the last war, I felt I had good reason to be cool to any charismatic leader.

One day, the whole bunch of us – I can still remember everyone by name – piled into a van to see Yogi Bhajan himself at Cornell University, a five hour drive away. This was the first time I wore a turban – a clumsy marshmallow-like thing on top of my head I was persuaded would please my teachers’ teacher. Our destination was a multi-faith forum Yogiji was speaking at together with Sufi Pir Vilayat Inayat Khan, Swami Chinmayananda, another swami, a rabbi, a pastor, a priest, and representatives of a couple of other faiths.

I remember Yogiji and Swami Chinmayananda gave the best, most unorthodox and impassioned presentations. On our first chance together with him, Yogiji taught us the Sa-Ta-Na-Ma meditation. Somehow it made a connection. Sa-Ta-Na-Ma has been a talisman with me through the years, keeping me safe and sane and whole.

When I had figured out a little about the Sikh tradition, I was determined to know more. One day when Yogiji visited Toronto, I asked him, “We know that Guru Nanak gave us the Mool Mantra to chant and meditate on, but what mantra did his Guru give him?” It was an unconventional question. I figured the answer might reveal as much about Yogiji as it would tell me about the first Sikh Guru.

Without a moment’s hesitation, he said, “Gobinda-ee Nameh.” It was not an answer you would find in any book. It was an answer just for me. He had obviously picked up my skepticism about the transmission of truths, especially the empowering and enlightening ones, through the ages. I was slowly warming up to this yogi.

One time, Yogi Bhajan came to Toronto and so far as possible, I would not let him out of my sight. I kind of stared at him for quite a while. You see, I had read in our Peace Lagoon (translation of Sikh daily prayers) that the sight of a saint could heal a person. I was hoping to kick my myopia by eyeballing him so severely. After tolerating it for a while, Yogiji opened his both eyes way wide and gave me a look of his own. I concluded that the Guru’s Words must have referred to some other kind of healing.

Other times, I studied Yogiji carefully to see how a real Master lived and conducted himself in the world. I remember one time observing how he several times folded and refolded a piece of paper to make a crease, then tore it straight and perfect, without a tear. I can remember too watching him feed his large frame by daubing little pieces of chapatti into modest portions of curry and beans. I also saw how Yogiji delighted in a big handful of prashad at Gurdwara.

Through the years, one of my specialties in our community was teaching and empowering the immigrant Sikh youth. It was very rewarding work, but there were few willing or able to do it back in the early ‘80s when Sikhs in Ontario and Quebec numbered only in the hundreds. (Today they number in the hundreds of thousands, including several federal, provincial and municipally elected representatives.)

In the winter of 1983, I took a station wagon full of teens and harmoniums and tablas on a tour of the dozen or so Gurdwaras from Detroit to Montreal in those days, raising money for a Sikh youth camp we planned for the coming March. When we asked Yogiji to name our little movement, he obliged in typical style. Think big. Think very big! He called it: “Khalsa Youth of North America”. Wow! A couple of days later, the meaning of the acronym also dawned on us. In Punjabi “KYO NA” means “Why not?” The question, as it turned out, had a lot of applications.

On short notice, Yogji, the Siri Singh Sahib, set aside his other commitments and joined us for our March camp. He was very pleased with our effort. He loved it when we stretched our hands across the cultural divide and helped our brothers and sisters from the East. It was wonderful. About fifty youngsters participated. It was a big camp for those days, only the second in the Toronto area, and by far the most successful. (An effort the previous summer had seen a number of unhappy campers run away and hitch-hike home.) Right way, we planned for a bigger camp in August.

Those were tough times, but it was always a good time to be learning from the Master. Two months after our camp, the Indian army attacked the Harimandir Sahib (Golden Temple). The Siri Singh Sahib grieved with everyone else, but he stood his ground for the unity of India and the oneness of the Sikh nation. It was not a popular stand among those who had lost loved ones in the assault and the years of martial law that followed. They bitterly accused him of being anti-Sikh for not supporting a separatist solution. We, his students, also stood accused.

One day, the Siri Singh Sahib called me and said we should call off the camp so as to preserve the unity of the community. Sikh parents were having to choose whether they were with our camp or against our camp. Were they pro-India or pro-Khalistan? It was not healthy for anyone to have to make that kind of decision under those circumstances. We cancelled the camp to wait out the storm.

Another time, a priest of some status told a congregation that the way I taught (and Yogiji taught) viraasan was incorrect. This was a pretty important point because during the Khalsa initiation ceremony the novitiates must sit in that pose with one knee up. Yogi Bhajan had said that it was the right knee that went up to apply a pressure to the liver. The priest said it was the left. I phoned the Siri Singh Sahib. Were we right? Were we wrong? His answer: both ways are correct. God bless the Siri Singh Sahib for always wanting to preserve the unity!

In my experience, our Siri Singh Sahib was at his beamingest just at the cusp where Yogis and Sikhs, Easterners and Westerners, great Masters and their eager students, came together. He loved the synergy when such diverse cultures joined as one for the common good; nay, for the betterment of all. He himself, whether as “Yogiji” or “Siri Singh Sahib ji”, was the embodiment of these inspirations joined as one. In the classical definition of Bhai Gurdas, the original chronicler of Sikh history and philosophy, he was a “Gursikh Jogi”.

My memory of him at the 1995 World Sikh Conference in Amritsar stands out. It was the very culmination of the conference. At the Manji Sahib Gurdwara adjacent to the Harimandir Sahib, thousands of Sikhs were packed as Livtar Singh led everyone in “The Song of the Khalsa,” with the Siri Singh Sahib at his side. Then the Siri Singh Sahib had Livtar read out, line for line, the words of the song he had written, as he (the Siri Singh Sahib) rendered it into visceral Punjabi to the ovations of the congregation.

After all the years of translating the Guru’s Words of Guidance from Gurmukhi into English, Spanish, German, Italian, French – Livtar Singh had hit the mark and Siri Singh Sahib had paid back a part of that priceless flow of literal inspiration from East to West. In the glowing faces and charged atmosphere of that time and place, it seemed an important watershed had been accomplished. It was not long before the whole place rocked as the thousands joined together as one voice: “Boleh So Nihaal! Sat Siri Akaal!” (Blessed is the one who speaks! Truth is Great and Undying!) 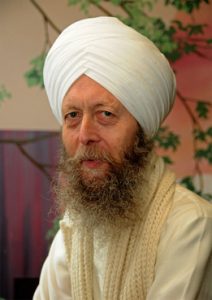 Guru Fatha began his study with Yogi Bhajan in 1972 when he was eighteen years old. That is when he began to teach yoga classes.  The next year, when Yogi Bhajan visited Toronto he was given his name, meaning “the lion who is the being of victory of the Guru.”  Their relationship continued through more than three decades of his Master’s teaching and travels.  During a visit of Yogi Bhajan to Toronto in 1983, he tasked Guru Fatha with writing “Messenger from the Guru’s House,” a biography of his teacher.  This marked the beginning of decades of intensive research of his Master’s life and teachings.  For more writings by Guru Fatha Singh, visit www.gurufathasingh.com

Home › Experiences › Our Stories › His Holiness: A Personal Memoir