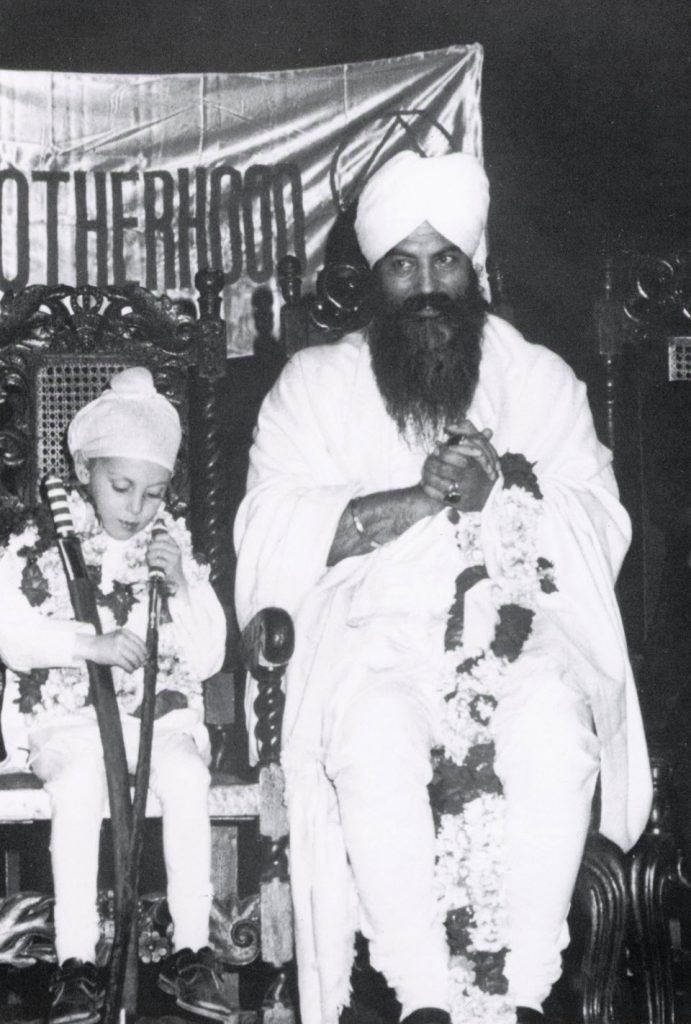 In the pursuit of my life, I found this state of consciousness in the House of Guru Ram Das.  The experience is so beautiful that even denying it or explaining it is impossible.  As you know, I am a very, very selfish man.  I don’t want a poor Guru and I don’t want a guru with a little tiny junky house.  You understand, I chose a Guru who has the most priceless, precious house.  I love it.  It is half marble and half gold-plated.  Still there are rubies and diamonds on the ceiling of it.  It I the cleanest house of all the homes I have seen, and I have travelled around the world to all religions.  And every day over ten thousand people are always fed in the name of the Lord and within twenty- four hours never a moment goes by when the Lord’s name is not praised.  Its beauty bewitched me, and its spirit exalted me.  And I found the joy of all joys right within me.

Siri Guru Granth Sahib is nothing but the God, the word of the people who have known God.  So, it is the Word. We bow to it.  We shall bow to it.  It is the Guru of the time.

I am a man.  I cannot be your Guru.  Truth is the guide; it is a help.  Is it wrong to help you?  So, my relationship with you is very simple.  I don’t want this guru- trip.  It doesn’t suit me.  I simply feel that God has blessed me to have some knowledge, and if I can share with my brothers and sisters in faith, and they can enjoy the same ecstasy of consciousness, we can all enjoy the same joy.

I love the sky because the sky has beauty; it covers everybody.  It covers black, it covers white, it covers brown, and at night the stars shine in it like diamonds.  It doesn’t discriminate against anybody.    It brings rain to every air and everywhere it’s blue.  What do you want to say to it?  Is it not your sky?  Is it not my sky?  It is our sky.  We like it because when we look to it, we look to something higher, and it covers all equally in its ecstasy of existence.

When Truth prevails through a man, the time which follows him decides who he is.  Within his time, he’s always a rebel, unwanted, nonrealistic, a triangle in a square.  It always happens.  If within my breath of life, I can serve people and I can give them the consciousness which God wants them to have, it will be up to time to decide what has happened.  Man cannot decide who he is.  It is His Grace which always decides.  I have mopped the floors of that temple and I have found the richest riches of my soul, and in that honesty, I share all with you.

I have tried everything.  I have learned every knowledge.  I started my life as a beautiful, faithful Catholic, Protestant, Buddhist, Moslem, Jew and all the sides of Buddhism of Japan, every Tantric of Tibet, and God knows what.  If I learned about a holy man, I went to the farthest caves to search him out.

One day I got mad at myself… What am I doing? Where is God? And I heard it was right with the beat of my heart.  That is why I always say, ‘Love a man of God and be a man of God, but worship only God.  Ye shall not bow to anybody other than God, even if you are cut limb to limb, because no man can be slave to another man.’

People touch my feet because they feel I am their father, they love me, they are my children.  That’s another relationship.  Nobody loves me because I am their Guru.  I am just a useless pipe.  I was stinking somewhere, but a good plumber picked me up and now I quench the thirst of those whose souls are thirsty.  Isn’t it a good expression?  I say, ‘Hail, hail, hail, to Guru Ram Das,’ who picked up, this meanest of the mean and made him a very meaningful person.