In December 1971, in preparation for the first 3HO Winter Solstice Sadhana, Yogi John Twombly arranged for the gathering to occur at the newly acquired ashram in a residential area called Pine Hills, in western metro-Orlando. Hari Singh, then employed by the Orange County Health Department as a drug abuse counselor and yoga teacher at Thee Door, later known as The Center For Drug-Free Living, (and more recently, as Aspire Health Partners) advised Yogi John against holding the Winter Solstice Sadhana at the Pine Hills location.

The ashram site was seen as being too small and without adequate facilities and permits. Yogi John however, indicated that he preferred not to engage any “establishment red tape” with the authorities and that despite Hari Singh’s advice he would proceed as planned.

Yogiji took charge of the scene and phoned Hari Singh to get engaged with the situation, and lend any assistance in order to mitigate the dilemma. Shortly after Hari Singh and Herb Brockman, a colleague from Thee Door, arrived at the Pine Hills ashram, Yogiji directed Yogi John to contact the Green Acres Mobile Home Park about 4-5 miles away. Arrangements were made and Yogi John advised all the Solstice Sadhana arrivals of plans to move the Winter Solstice to the Green Acres site.

We returned to the Pine Hills ashram with the kids in the early evening intending to drive to the site in a caravan. Upon arrival, Yogiji met us and directed the four of us to take him in our little VW Bug to the Green Acres campsite, which was located at 9701 S. State Road 434, on Forest City Road in Seminole County, before its demise in the late ’90s or early 2000.

He directed us to catch up with the lead vehicle at the head of the caravan, which required us to encounter considerable numbers of oncoming traffic on the narrow two-lane rode. It was turning dark, and when we got to the head of the column we approached a fork in the road. Yogiji asked for our flashlight and directed us to stop the car. (See Winter Solstice Sadhana 1971 – A Poem.)

He then got out of the car and proceeded to direct the following caravan to the right fork that led to the site, waving the flashlight, whereupon he jumped back into our VW and directed us to proceed to the front of the column again before we reached Green Acres, which was about a 10-15 minute drive from the Pine Hills Ashram. What a great ride! What a great night! What a great Winter Solstice Sadhana! 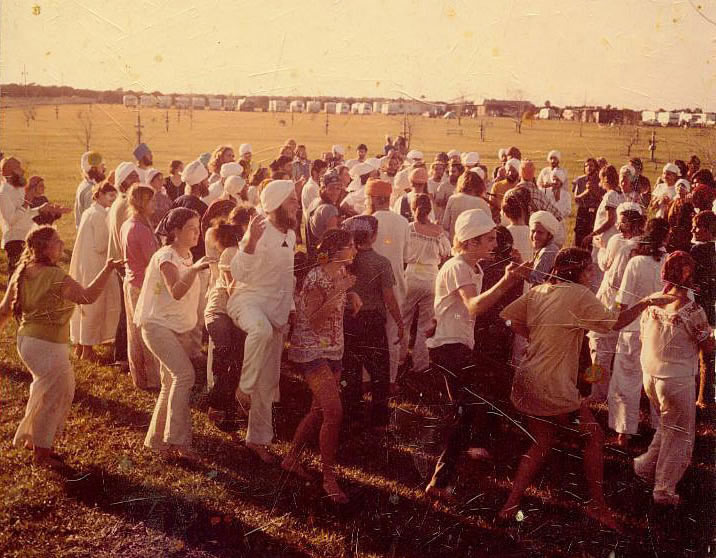