Home › Experiences › Our Stories › The Yogi, the Savages, and Amazing Grace

This article was written by Ganga (Bhajan Kaur) Barrett and shared via www.harisingh.com

I was blessed to come to Yogiji in the early months of 1969 in Los Angeles, and was privileged to serve in his household. I watched as the students gathered, as the classes grew, as the songs were written, and as the family was formed. My years with him were the crowning glory of my heart and soul.

I hope you enjoy our stories as much as you enjoy creating your own. Ultimately, all stories share the same theme, one of self-discovery and the journey of the soul. It is the variation that makes them interesting. Ironically, the more personal a story, the more universally it speaks. Such is the underlying bond of human existence.

I have many memories of the Phyllis house as well as its genesis. Shakti may have already told it all but here’s a bit from my end starting with what I know of Toronto to California. That part is culled from my memory of what YogiJi used to say when I met him in March of 1969 in Los Angeles. After his Toronto experience he was invited by Dr. Marwha to come for a weekend to Los Angeles. Once here he stayed. Next he was somehow invited by the ladies of the East/West Cultural Center where I believe he began to teach his first yoga classes. Again, Shakti would know best as she was there a bit before I was. At that point he had a tiny little studio apartment near the Center around Vermont, I think.

One day a bus load of hippies from New Mexico comprised of me and the Juke Savages: Lisa Law, Tom Law, Paul Ehrlich and Steve Samuels (who went on to open Banana Ananda Ashram in Marin), pulled up to take his class. Oh, we were a sight alright!

After living in teepees and studying with the Hopi in northern New Mexico for several years we came looking for our spiritual teacher and pulled up with teepee poles on top of the bus, a steer skull on the grill, guitars and flutes in tow, covered in feathers, beads and embroidery. In we tromped and The Yogi, as we called him then, never batted an eye. Oh yes, we were a sight. “Savage” covered it.

Slowly YogiJi’s classes grew with some Hollywood types and more hippies and the little old ladies of the East/West cultural center were so horrified they gave him an ultimatum. Either the hippies had to go or he had to go. They never thought he would choose us over them, but he did. I had seen people turn their backs on our generation but I had never seen anyone stand for us the way he did. He said, “These are my people, these are the people I came to teach and I will go with them.” The Center was sponsoring his Green Card, yet still he chose to align himself with us and found another place for us to have yoga class. Many were the times in the future that I saw him take that same stand on principle; no one could buy him, no one could manipulate him, no one could threaten him, no one could seduce him. And believe me, I saw them try. That sealed the deal for me. I had never seen a man who lived his principles in action the way he did. Who, when the chips were down, stood for what he said he stood for. Who gave up comfort and security for principle. Many were the leaders who said they did, but my lost generation was riddled with the bullet holes of betrayal. YogiJi had my allegiance from that day forth. And look at the nation he has generated.

But I digress. Jules Buccierri was a West Hollywood antique furniture dealer who had been coming to yoga class at the Center and he offered the use of his antique store on Robertson Blvd. for classes. So every morning we moved all the antiques out of his store to his parking lot, held class, then moved everything back in. We did the same thing each night. Seven days a week. Do you know how many delicate little things are in an antique store, how full to the brim of furniture pieces great and small? But what else did we have to do? As the classes grew so did the helping hands, the laughter, the comradery.

Soon Jules invited YogiJi to come live with him at his two-bedroom Phyllis Ave. home. Jules took the second bedroom, and gave YogiJi the “master.” Although, it was a very small house it did great things. It didn’t take long for YogiJi’s schedule, visitors and mission to take over the house and soon Jules moved to another home, but maintained the invitation to his home. Bless his heart; Jules was a dear and generous man.

Shortly after that Premka and I began to live with YogiJi in the Phyllis house. I slept in the kitchen. Premka was in the infamous garage. I remember Shakti came every day in her little white go-go boots… Can you imagine, she was so adorable but not at all a hippie. I will always adore her and in some other section I’ll tell you how that love began. She had her little Santa Monica apartment and worked at the Beverly Wilshire Hotel coffee shop. She was the only working member of our little family at that point and I think she did a lot to support us in more ways than one. She certainly was the only one with a clear head on her shoulders aside from YogiJi, that’s for sure. 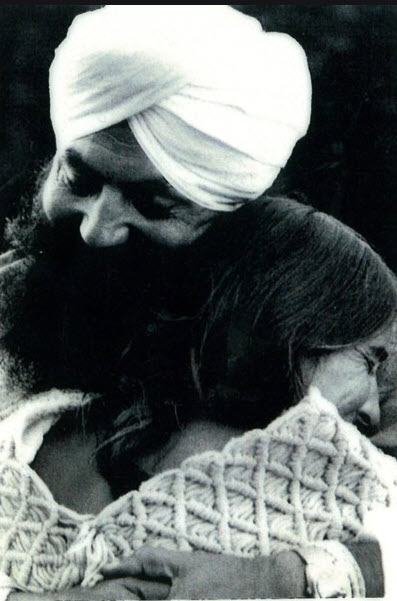 I had helped Jim Baker open The Source Restaurant on Sunset and worked as the patio waitress when it opened. (An aside, that’s where Sat Simran came as a customer and I think I told her about the yoga classes, or maybe she already knew… but I know for sure that’s where Baba Singh was my customer and I told him about the classes. Anyway, we told everyone about the classes because we believed in them so much and soon everyone who worked at The Source went to class.) Anyway, with my tip money, which wasn’t but a few dollars in those days for the day shift, I would stop at the health food store on the way home and buy whatever I had money for. I’d make dinner from whatever the earth had made available to us and somehow there was always enough for the many guests YogiJi invited or who stopped by. I had had the experience in New Mexico of feeding large groups with just what was given away at the market plus a few food stamps and I had it again at Phyllis house — loaves and fishes, or loaves and broccoli as it were. Many magical things happened in that kitchen. I can’t honestly say what magic happened in the living room because I was always in the kitchen.

Once when I complained a little that I wanted to wear a pretty dress and sit in the living room YogiJi told me to just chant, cook and do the dishes and I would wash all my karmas away. So that’s what I did. And I heard the angels sing. I loved my simple little world. I felt like Snow White, the birds sang to me, the angels sang to me, the food sang to me and my heart sang right back. It was a wonderful time and one of the many lessons I learned was that it doesn’t matter what you are doing so much as it does with what you are doing it. When you do it with heart, it all becomes love.

Read and listen to the first known recorded lecture by Yogi Bhajan from April 13, 1969, which took place at the East-West Cultural Center in Los Angeles. 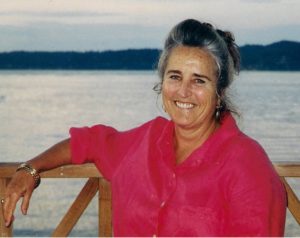 Ganga is one of Yogiji’s original students along with Shakti Parwha Kaur and Premka, having come to Los Angeles via New Mexico in 1969. Many traditions were begun in those early years and she is grateful to have participated in their formation. After her marriage was arranged to Lehri Singh in 1970 they went on to co-direct Ahimsa Ashram in Washington, D.C. for ten years. During that time she opened the first Golden Temple Conscious Cookery Restaurant, taught many women’s courses and toured extensively in India representing the American Sikhs through Gurbani Kirtan. She joined the Los Angeles Sangat in 1980 where she built a successful practice in healing energy work. Today she is “semi-retired” and lives on Bainbridge Island in Washington State, a 35-minute ferry ride due west of Seattle. She says she feels forever connected to Yogiji, the 3HO family and Gurbani. These remain the heart and soul of her life.

In addition to offering his antique shop for Yogi Bhajan’s yoga classes, in 1969, he offered a third of his MELROSE AND ROBERTSON corner building to YOGI BHAJAN for a school room. Soon all the movie stars were lining up for yoga classes twice a day. Jules started building the brass beds previously founding Mexico City, in L.A., in a friend’s three car garage, using Guru Singh of LA to run the factory.  Read more about Jules here.

Home › Experiences › Our Stories › The Yogi, the Savages, and Amazing Grace