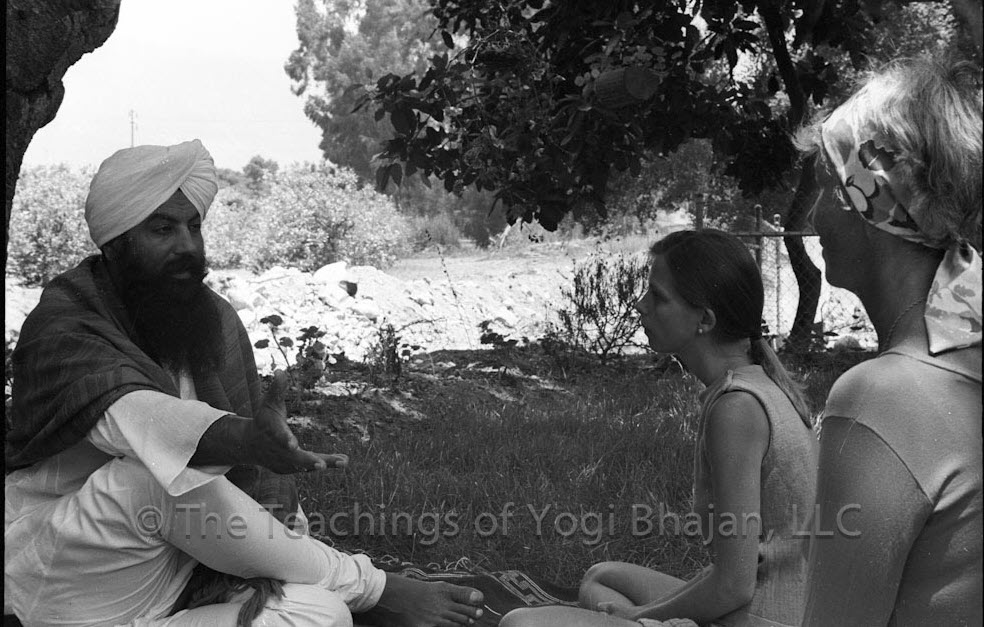 This is, to my knowledge, the earliest class of (Yogi Bhajan) of which we have an audio recording (April 13, 1969). In this talk, he provides a vast overview of his roots, his moorings as an Indian, and especially as a Sikh. He shares with us the things most dear to him: his Guru, his heritage, and his love of history as a conscious flow of sacrifice and heroism; this to his young audience, themselves unmoored and looking for new directions, new tactics to change their society.

Yogi Bhajan summons them to a new kind of heroism, not passivism and not the kind of violent revolution that many leaders of the counterculture of that day were calling for. Yogiji calls on the youth of that time to engage in a gutsy revolution from within based on the inspired teachings of Guru Nanak – teachings of equality, dignity and peace. As Yogiji does so, he also depicts a culture where valor and righteous struggle are sometimes required and necessary. He recounts the destructive toll of the invaders Mahmud Gazni and Babar, and the brave efforts of Sikhs against the Mughals, the Afghans, and then the British. Yogi Bhajan was a master story teller and this talk is full of tales of Guru Nanak and more.

It is worth noting all Yogiji’s references to religious, especially Muslim fanaticism. Back in 1969 hardline Islam was hardly a concern for Americans. Afghanistan in those days was a peaceful, tolerant kingdom. But Yogi Bhajan, who had personally survived the creation of Pakistan on the basis of religious intolerance in 1947, and witnessed the loss of hundreds of thousands of lives that entailed, may have been prophetic in focusing on it.

If English is your only tongue, you might find Yogi Bhajan’s speech a little hard to make out. I recall Shakti Parwha Kaur recounting how she used to serve as “interpreter” for his students in Yogiji’s early classes, when his accent was yet quite thick. The written transcript is word for word as he spoke it, with just a few words in parentheses so as not to take from the original flavor of the talk. It would appear Yogiji was often thinking Punjabi and speaking English.

Yogi Bhajan is not remembered for his command of English, though he learned soon enough and even turned out some wonderful poetry in our western tongue. And as Yogiji himself admitted, he was also not a great memorizer of religious texts. But Yogi Bhajan is greatly loved around the world for his unitary vision, his graciousness, his tireless teaching, and his ability to inspire the very best in people. And for this, we celebrate the publication of his first Baisakhi talk in the West, delivered in his early days in Los Angeles, at the East-West Cultural Centre.

Excerpt from this lecture:  “And it is only five hundred years ago when this man came to this world with a message of peace, equality.  His peace was different.  He said, “You are to be equal.  You have no power to differentiate between the black and white, between the Muhammadan and Hindu, between the Christian and a Buddhist, between the tall and the short, between having the long hairs and the short hairs.  You have absolutely NO difference and you can NOT preach difference and thus you cannot RULE, and others cannot be RULED.  For sake of securities, all right, but for sake of exploitation, it is wrong.” ~ Yogi Bhajan