Home › Experiences › Our Stories › Unto the Guru’s Feet 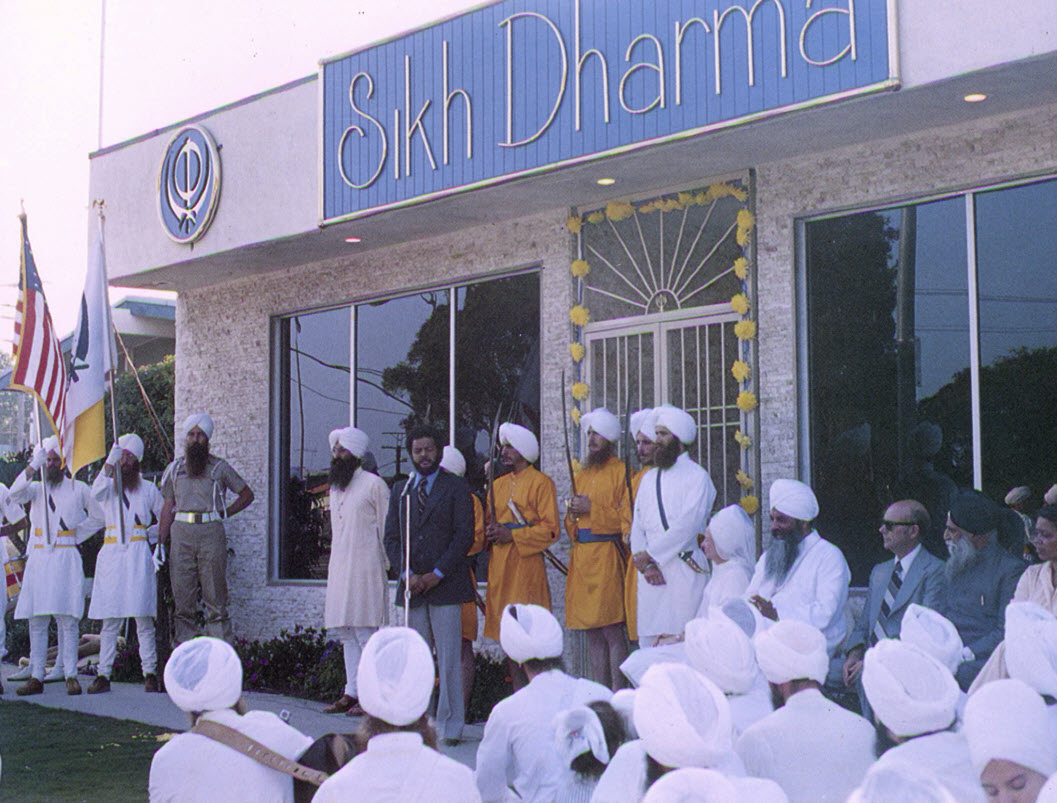 This passage by M.S.S. Sardarni Premka Kaur Khalsa, Los Angeles California (aka Pamela Dyson) was published on page 263 of the book, The Man Called the Siri Singh Sahib, which was published in 1979.

During the first tour of India (1970-1971), we had come to the Golden Temple, and many of us were planning to take the Amrit.  I was serving as secretary for this tour and so the Siri Singh Sahib and I had spent the whole morning getting everyone ready.  We had instructed everyone to wash their hair, had distributed kacheras, kirpans, and everything they needed to take their Amrit vows.  Finally, we proceeded to walk to the Akal Takhat, where the Panj Piare awaited us.

After completing the walk around the parkarma, we arrived at the threshold of the Akal Takhat and the Siri Singh Sahib stood on one side of the door, while I stood on the other, and we directed each individual up the narrow, winding, staircase to the top floor where the Amrit would be administered.  When everyone had passed through, I waited for the Siri Singh Sahib to go ahead of me (as was my usual practice), but today he said, “You go!”  I thought, “Well, okay, this is some special situation.”, so I began climbing up the stairway. (263)

Then I realized that he wasn’t coming behind me.  I kept waiting, thinking he must be talking with someone.  But slowly the reality dawned on me, and I experienced this tremendous overwhelming realization of what he was doing.  He was giving me into the hands of the Guru.

My attachment was great; The Siri Singh Sahib had been my spiritual teacher for two and a half years!  How could he do this to me?  I debated within myself.  I was going to run back down and go after him.  I wasn’t going to let him desert me like this! Or had I deserted him because he was out there without his usual assistant?  Was I supposed to follow his instruction or was it a test?  Ultimately, though, I knew that he had just completed his responsibility.  He couldn’t let me or anyone remain attached to his personality.  As a Sikh, he has inspired me, taught me, and led me to the feet of the True Guru.

“The day, (March,1971), in Patiala, India, when we were shot at, my beloved children immediately put me in the center of themselves and laid on top of me.  Then the police came with guns and all that, and directed the crowd to disperse, and started searching for the gunmen.  When I got up, I couldn’t control my tears.  I wept like a baby.  The superintendent of police said, ‘You are a yogi, and you are crying?’  But they’ve all run away; there is no problem.’  But I was not crying because they had run away or because they had wanted to kill me.  I was not crying over that.  I was crying to think that I deserved the love which these people had given to me.  That was my own country in which I had lived for thirty-nine years.  I had been an officer, I had many hundreds of friends, but when an attack was on my life was made, who stood by me?  Those who belonged to me.  Then I knew that I belonged to them, as well, because they had put their lives in jeopardy and covered me.  If a second round of fire had come, they would have been hit, not me.  They were quit a weight upon me.  There were ten or twenty of them.  They just folded themselves on top of me like a lotus.  That is higher than anything else I can think of.”  (The Siri Singh Sahib, Yogi Bhajan, October 10, 1974)

Home › Experiences › Our Stories › Unto the Guru’s Feet