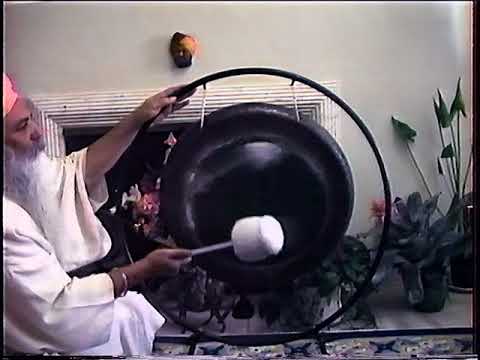 It is not an overstatement to say that Yogi Bhajan, the master of Kundalini Yoga, was the most influential individual in spreading the use of the Gong, from India to the Western world, as an instrument for meditation and healing. Beginning in the early 1970s, his students (of which I was one) used the gong, in their ashrams around the world, to help people recover from the damages of drug use.

Today, the majority of gong players who use the gong for sound healing and meditation are also practitioners of Kundalini Yoga and the teachings of Yogi Bhajan. Yet little attention has been given to the style of gong playing that he brought to the world. 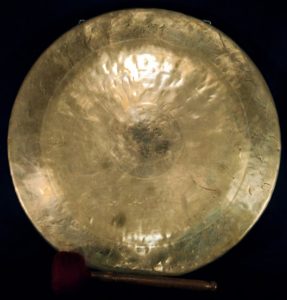 Yogi Bhajan learned to play the gong on the types of Indian gongs used in temples and celebrations (in India). These gongs are typically flat-faced, thicker than the European gongs most Westerners use, and without the markings or shavings found on Western gongs. They were not as responsive as the European gongs and needed to be struck more heavily without the attention given to working with the harmonic overtones the Western gongs can produce more easily.

Furthermore, Yogi Bhajan very rarely ever played the gong for relaxation as is commonly done today. He played the gong primarily for meditation and as accompaniment for the kriyas he taught. Consequently, his gong playing was more active than passive. In fact, he often said that he used the Gong to “push you through,” to help students break through their resistance. 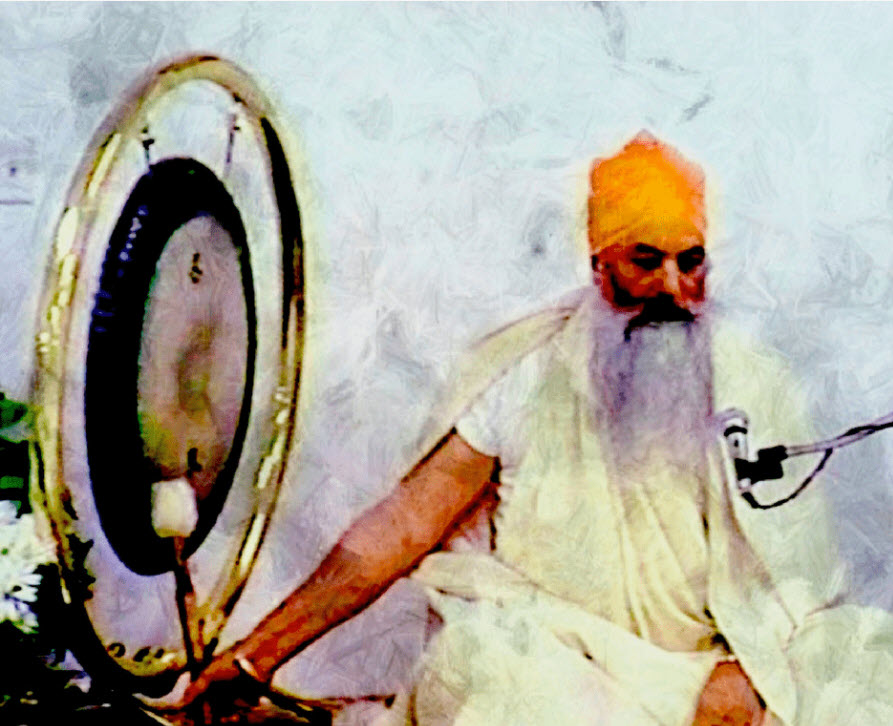 Like the Indian gongs he trained upon, he also tended to play the Western gongs in a heavy striking fashion. Because he was a master in both yoga and the gong, he knew how to do this type of playing perfectly for the yoga he was teaching. However, it is good to remember that the gongs now used in yoga classes are different in nature and are capable of responding with more subtlety than the gongs he learned to play.

He did enjoy the experience of playing the Western gongs, primarily those produced by Paiste. One of his first gongs in the United States was a 28” Paiste Symphonic gong that his students hung on a brass frame they made for him.

Over time, he was able to play somewhat larger gongs and had a preference for the 30 to 32 inch Paiste Symphonic gongs, which were the sizes that the Kundalini Yoga ashrams could afford at the time. In May 1989, while on a trip to Hamburg, Germany to teach yoga students there, he was introduced to the new line of Paiste Planetary gongs. Being also a student of Vedic Astrology, the gongs fascinated him.

Upon seeing these gongs, he said: “Oh my God – I cannot believe I never saw a collection of gongs that much – it is amazing. We have a special treat tonight.”

Yogi Bhajan once said the “Gong is the instrument of the Yogi.” And he used it as a tool and as an extension of his own reach into the energy of the classes he taught. While his gong playing would rarely qualifying as relaxing, it was extraordinarily transformative and his mastery served as an example of what the Gong was truly capable of doing.

Perhaps his most powerful use of the Gong with yoga occurred in his series of Rebirthing classes. They are demanding, and he used the gong to exalt the students in their efforts, sometimes playing it for 15 minutes or more during a meditation. 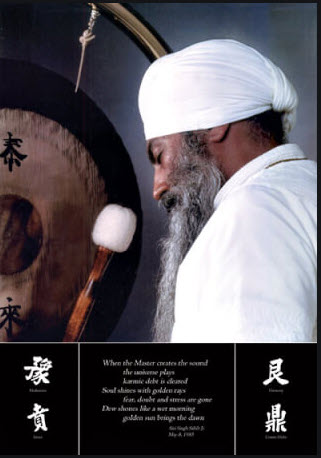 Copies of this poster are available through Sat Nam Europe.