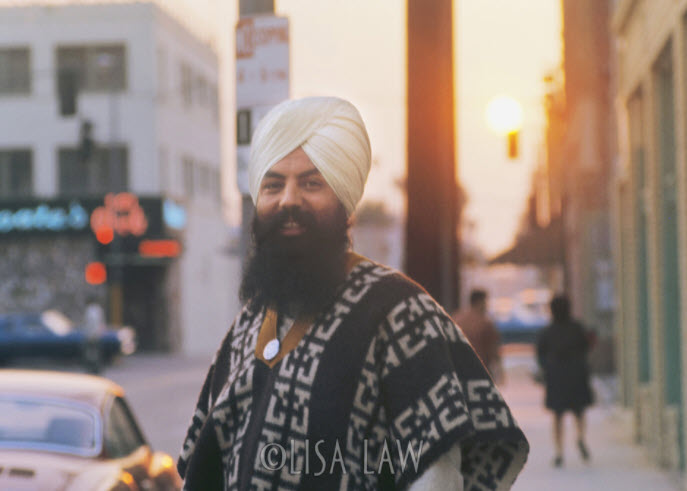 Yogiji would sit on the couch and visit with anyone who was around, and stayed several days, since he did not have a regular schedule in those days. At night, Yogiji slept in the third bedroom, and his secretary, Premka, slept on the floor. That bedroom was selected, because it had it’s own air conditioner, and could be regulated separately from the rest of the house, so the guest’s comfort could be guaranteed. It was Sat Kartar’s, our son’s bedroom, and during that time he slept on the floor or wherever he could find a spot in our bedroom, as did our daughter OngKar. The other 20 plus people slept wherever they could. Usually, it was side by side throughout the entire house. Some also slept on the back porch or the pool deck.

Most of the folks enjoyed acid rock music, but we preferred the music of the Mantovani Strings with full orchestra. Most of our 33-1/3 stereo recordings were of this easy-listening genre. Yogiji indicated that he really enjoyed this type of music, so we placed a sign on the stereo indicating, “This stereo is to be operated by the Birds only,” which ensured that Yogiji’s favored music would be played. Yogiji indicated several times that he really appreciated the gesture.

On one occasion, a large boil had developed on Hari Kaur’s forehead just prior to one of Yogiji’s visits. When Yogiji saw the boil he advised Hari Kaur to slice an onion in half and to heat one half as hot as possible to the touch. He then applied the hot onion to the boil several times in succession and then popped the boil.

Yogiji introduced us all to the idea of showering each day in cold water. He taught that a daily cold shower does wonders for the nervous system. See Ishnaan, The Science of Hydrotherapy, a Lecture by Yogi Bhajan.

Yogiji also introduced my wife and those present to Ashiatsu or ‘Back Walking’ whereby the spine is realigned and a great deal of tension is released. The first time he applied this technique to Hari Kaur he registered shock at how much adjustment occurred. Hari Kaur has used this technique on receptive people ever since. It really feels great.

On another occasion, Hari Singh introduced Yogiji to a special rice dish that he perfected as a young teenager. It’s called Sopa Seca or just plain Sopa. It’s made with ‘tons’ of garlic, and lots of onions and tomatoes. Yogiji could not get enough of this dish, and he requested, actually he ordered that Hari Singh prepare a batch of sopa whenever he visited Orlando. Yogiji in turn introduced everybody to things like his renowned Yogi Tea and beet and carrot casserole. Then, there was avocado on toast with raw garlic, and some of his now famous spicy dishes, some almost too hot to handle

Yogi Bhajan Amidst The Orange Blossoms

In 1970, during a Yogi Bhajan visit to Florida, a photographer by the name of Mikio Kuzumoto, a Kundalini Yoga student and active duty Major in the U.S. Air Force at the local airbase, took a series of exceptional photos of Yogiji in the courtyard of a church in Orlando. Yogiji had gone there to conduct a lecture and Kundalini Yoga class. The photos (see above) were taken before a background of blossoming orange trees on the church property.

One day during this time, Hari Kaur was looking out of the kitchen window into the back yard and the pool deck. On the deck, were Yogi John and a young woman, Noreen, in full lotus, both naked, being photographed by Mikio. Wondering what Yogiji would think of this, Hari Kaur called for him to come see, and when he looked, he rolled his eyes, shook his head from side to side, shrugged his shoulders, and just walked away without a word.